Black metal is probably the darkest and most controversial sub-genre of heavy metal music. The fans of this genre need to balance its macabre brutality with being grounded in their daily lives. Over a period of time, they learn to laugh at all its drama while being focused on the music.

Here, we’ve presented some of the amusing instances of black metal satire. They involve some old-fashioned comedy, parody, and spoof. If you’re a black metal fan, you’ll laugh with the black metal scene and not at the genre.

This is an animated adult American television series, which was created by Tommy Blacha and Brendon Small. It premiered on the 6th of August 2006. The hilarious show followed the misadventures of ‘Dethklok’, a fictional metal band. In the episode titled ‘Dethdad’, the series satirized black metal.

The band go to Lillehammer in Norway and visit Drop Du Selv, which is a record shop. They meet and chat with a man wearing corpse paint. It was an obvious reference to Helvete, the record shop of Euronymous in Oslo. The shop was where Euronymous and his friends from the world of black metal hung out.

The Barbie doll has been a favourite of many kids worldwide. Since the 1960s, it has been an icon of children’s toys. It has been around well before the advent of metal music. However, it got a little bit of a makeover in the year 2017. On a YouTube channel called ‘TEENBARF’, a parody of the Barbie commercial was uploaded during the very next year.

For the first time, Barbie was seen wearing corpse paint and a Bathory shirt. She was named ‘Black Metal Barbie’ and was shown burning a church replica in the video. The video received a lot of views as the audience found it quite humorous.

In 2013, Joey Siler became an instant hit among metalheads with Cooking Hostile. This animated parody series got a lot of laughs in one of its videos. It imagined what a cooking show would look like if its guests included Lemmy or Phil Anselmo. The video was also admired greatly by Phil Anselmo himself, who gave it two big thumbs up. Take a look at it here on youtube https://youtu.be/8IdCwtIijOA

Two years later, Siler tipped his hat to black metal with a video titled Becoming Black Metal. It shows the protagonist buying a black metal starter kit and transforming into a Euronymous lookalike. He does this with the help of a video by Duke Onyx, a corpse-painted cowboy.

Black metal is known for all sorts of crazy things. It, therefore, doesn’t come as a surprise when holidays are made fun of in this genre. The warmth and cheer of the season are often railed against by black metal. This is exactly why Shredders Apparel came up with a unique idea.

They included an ‘Ugly Christmas’ sweater in their collection of apparel. It was truly appealing for those who fancied the idea of standing beside a snowman in corpse paint. You could also choose a sweater that approached the Yuletide look with the image of a Baphomet on it. 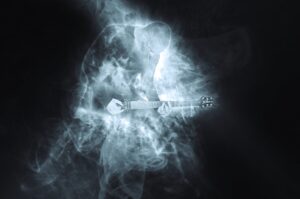